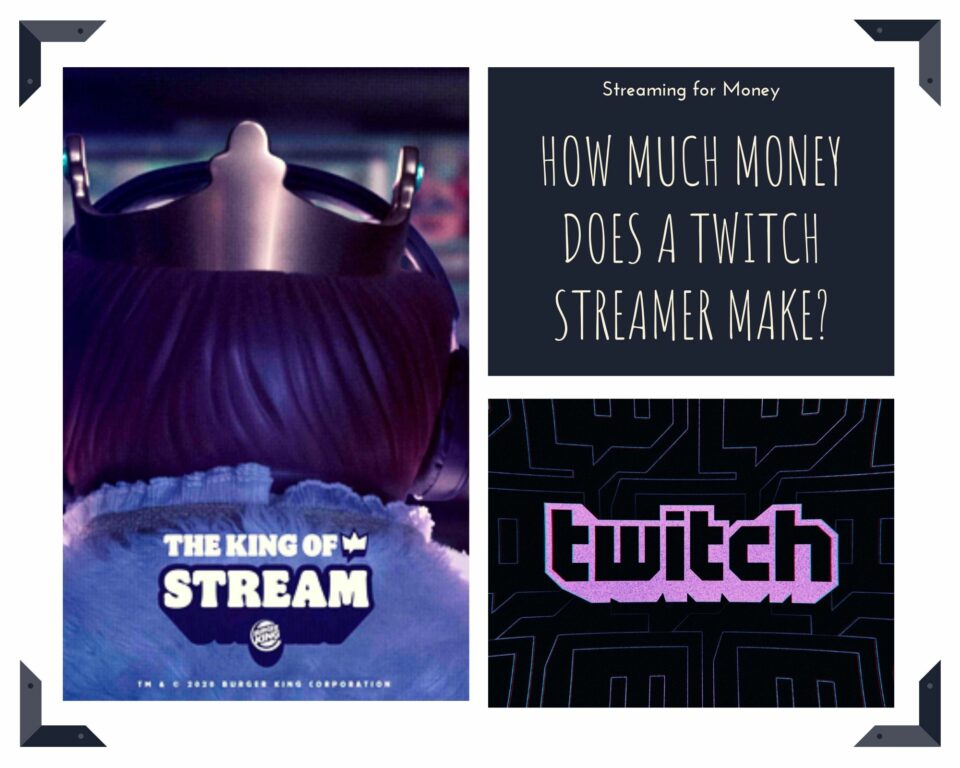 As the world’s largest platform for online gaming streaming, with more than 41.5 million users in the US alone, Twitch has taken the young generation’s attention by storm. With the top streamers making $370,000 a year, it comes as no surprise that the platform offers a huge fanbase and wealth. But how much can average streamers and pro gamers make per month?

Let’s delve deeper into the different sources of income, how much are you paid per sub, per bit, and how a streamer can make more money! 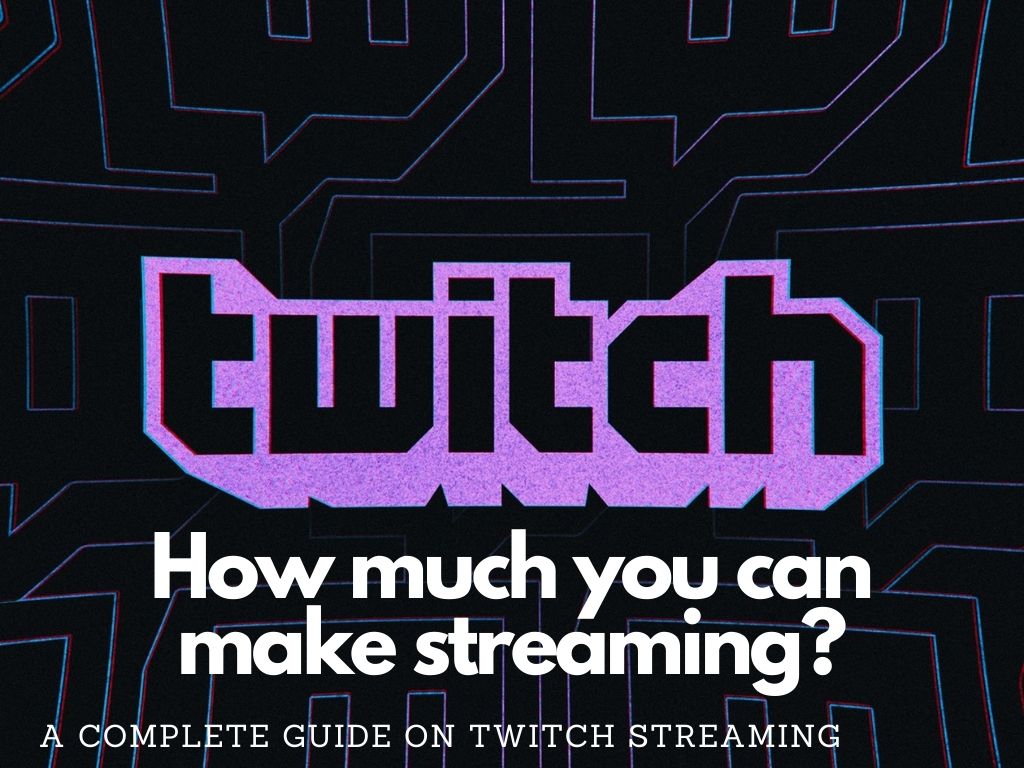 In order to understand how much a streamer can actually make, we need to look at different factors. What type of content does a streamer produce? Who is their target audience?

And most importantly the sources of income they use to monetize their content once it starts building an audience? One of the most common ways is through something called Bit donations.

There are other major sources of income that hugely affect a Twitch streamer’s paycheck:

All these can stack up thousands of dollars if an audience gets hooked on someone’s content. At the end of the day, it’s all about pitching an entertaining video stream that attracts paying customers like any other business or venture.

However, most full-time streamers and professional gamers who dedicate all of their time to the content they’re providing, create websites, promo their merch through email, upload their content on Youtube and provide educational content on Vimeo. Some creators like Hanna Owo and Indiefox even use OnlyFans to earn more through donations and cater to the needs of a new audience.

Let’s look at some ways how Twitch streamers make their own money.

How to make money on Twitch? – A streamer’s source of income

There is a golden rule when it comes to Twitch streaming and actually planning to make some money:

There are multiple opportunities for all streamers on Twitch, but all these opportunities stem from your audience. And this should be every streamers’ priority in order to build their fanbase and followers. The success of Twitch streaming and making money through it is determined by a streamer’s ability to attract and entertain an audience.

Assuming that you’re a pro gamer with an engaging audience who enjoys watching you do 360-no-scope kills or Mortal Combat-styled kills, then you’re on the right track. All that remains now is to make money from your viewership. But how can you get started?

This is basically the beauty of the internet and Twitch in general. Top streamers build multiple income streams to support their lavish living. They understand their audience, their preference, and what makes people open up their digital wallets to help make money streaming.

We have listed 7 ways to make money on Twitch. However, there are three common ways that all Twitch streamers are using within the platform itself.

The most common one is through ads or ad placements. How much money you can make from Twitch ads varies based on geography, content, and the type of ads displayed. Between videos, there are ad breaks that are similar to Youtube lasting anywhere between 30 seconds and 3 minutes. The income from ad breaks depends on how many viewers see the ad.

How much can you earn with a single Twitch ad? According to Credit Donkey, Twitch streamers make around $2.50 per subscriber. This is a really high number considering other channels like Youtube or Google Adsense. 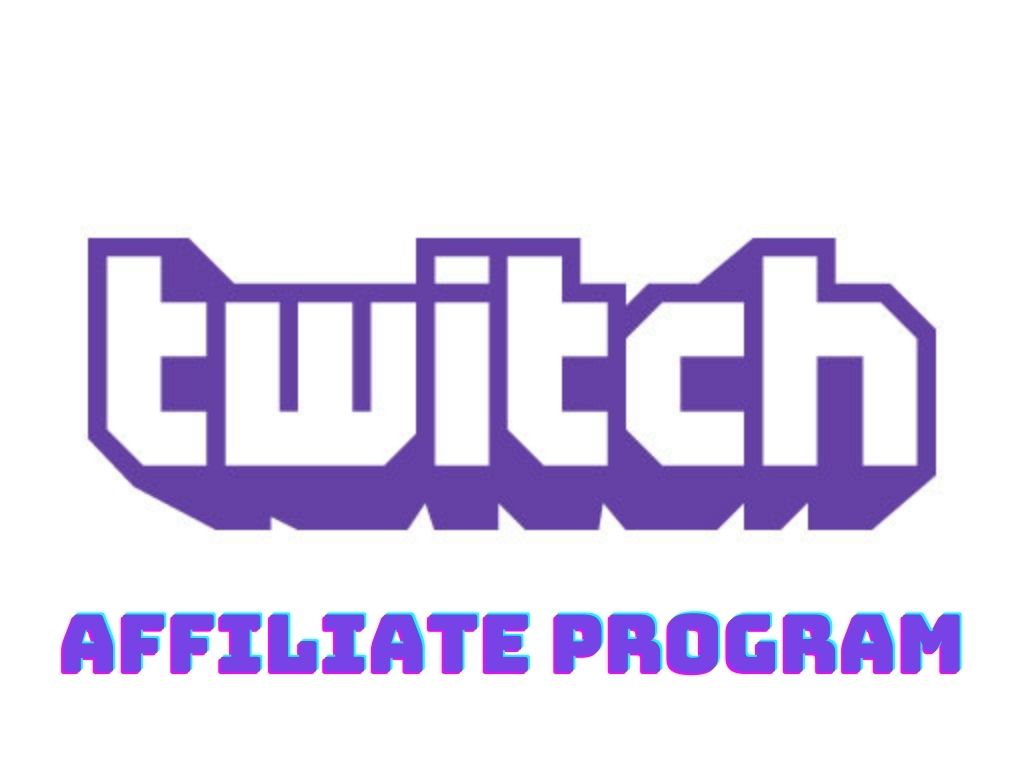 The Twitch affiliate program is a great method to help anyone who loves to game and share it. But it has a more complex approach towards making money than most affiliate programs offered by other SaaS companies through its Twitch Partner program.

Let’s find out more about what this affiliate program is all about and how anyone can become one to earn more money for themselves.

Originally there are 2 different programs, an affiliate, and a partner program. Prior to becoming and partner of Twitch, one needs to achieve affiliate status. What do you need to do for that to happen?

Apart from some general rules in terms of age and compliance, a gamer needs to have at least 50 or more followers along with 8 hours of streaming content for the upcoming 30 days.

The aim of this Affiliate Program is to place dedicated streamers one step closer toward playing their favorite games and provide more and more content. So how much can you earn as a Twitch Partner?

As a Twitch affiliate, one can go and pursue different payout options: $4.99, $9.99, $24.99, and the Prime free subscription. Affiliates also get one global subscriber to emote for all subscribers, with the option of adding two additional for $9.99 and $24.99 subscribers.

Once a streamer crossed the $100 he or she can cash it out.

If a streamer who is an Amazon Affiliate, promotes a new game to his or her audience, that person can leave an affiliate hyperlink to the product itself. Once someone buys that product by clicking on the streamer’s link placement and purchases the game, the streamer gets a commission.

Let’s say (hypothetically) the new Witcher 4 game came out at some point that costs $100. The streamer displays a hyperlink towards Amazon that offers a 5% commission. Once someone buys the game through the link, the affiliate gets $5. Assuming that a popular streamer with thousands of subscribers sells 100 Witcher 4 games a day, will eventually make a profit of $500.

Sometimes it’s better to use external affiliate programs rather than just sticking with Twitch, since the platform takes a 50% subscription fee, meaning an individual streamer makes $2.50, $5.00, or $12.50 per subscription.

However, some elite streamers who rack in big bucks can keep even more of the subscription fee; some are reportedly able to keep up to 70%.

How to get donations on Twitch? 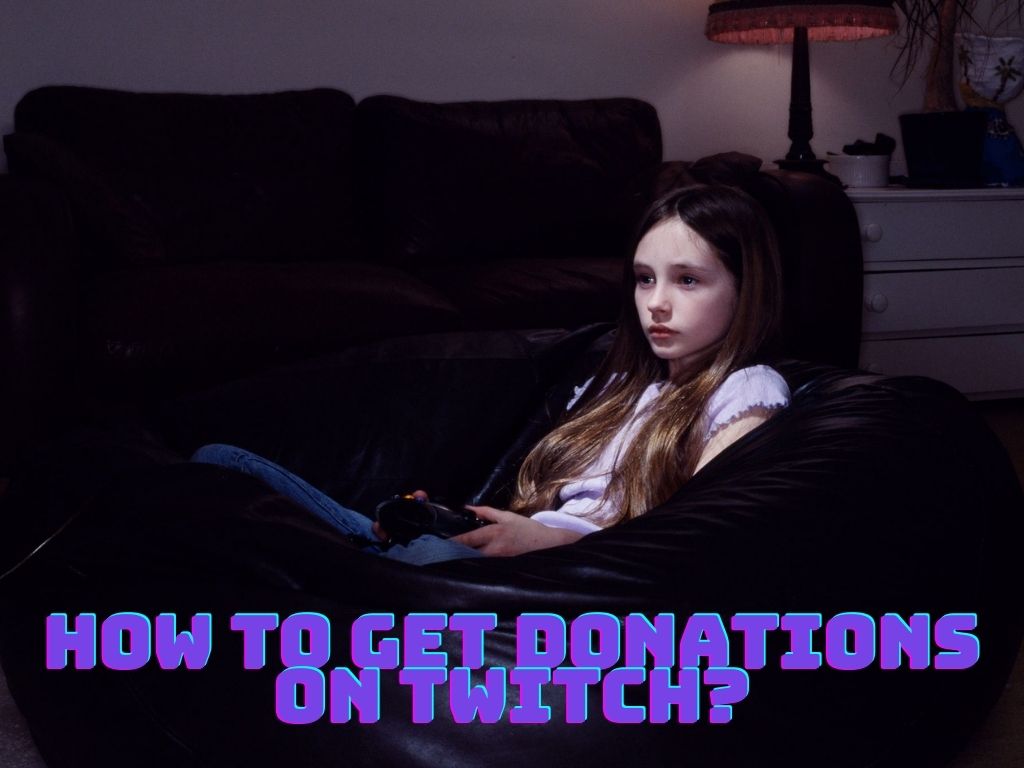 Donations and bit cheers are perhaps the fastest ways to make money. But they never come easy. Few people will ever reach into their virtual pockets to claw out money and throw it at a random streamer.

Why is that? Simply because the number of content creators is huge and varied across Twitch fighting for constant attention. There are many professional gamers out there!

So what is the best way to get donations and how much do most streamers make from them?

Similar to an OnlyFans type of approach, you can simply ask your loyal followers and viewers to donate directly to your PayPal account. There is a chance to set up a PayPal donation button. The income through donations really varies and can be anywhere from a few dollars to thousands.

The biggest donation that ever took place in Twitch’s history happened to a gamer called Exotic Chatotic who received $75,000. 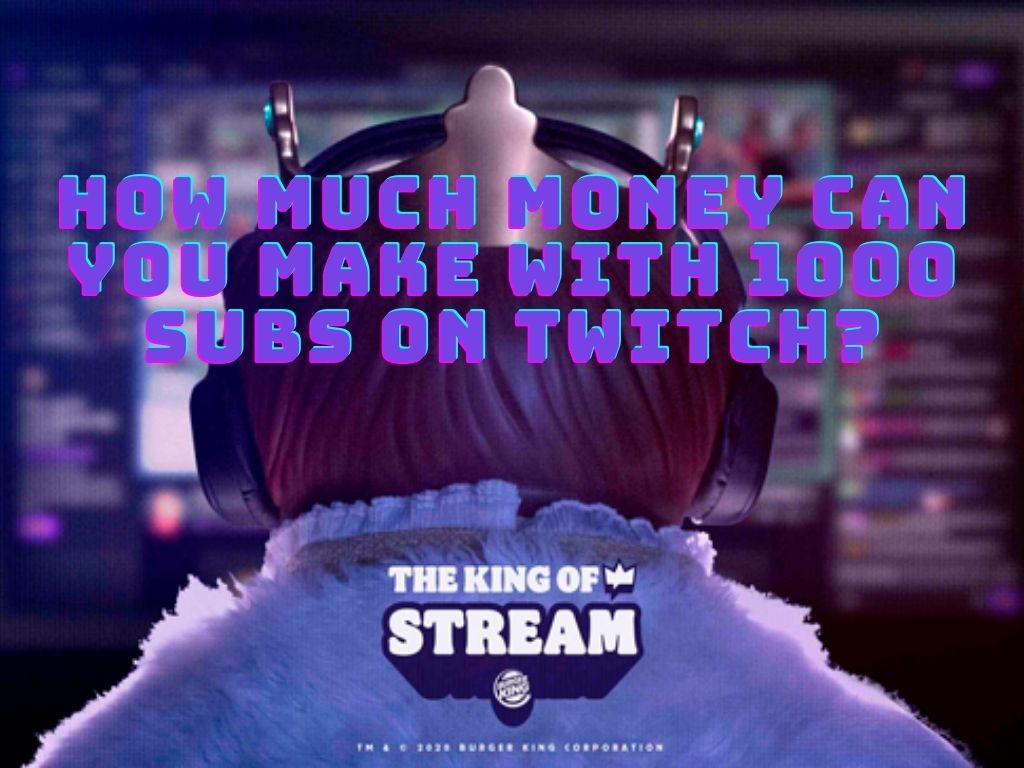 Based on all the income sources mentioned above it is difficult to give a clear number based on having 1000 Twitch subs. But there are certain ways to make good estimates.

Let’s assume that you are a pro-gamer. (Of course, you are.)

With 1000 subscribers you have a chance to display your ads, get donations, bits and cheers through your content. Since most streamers enjoy a global audience, there is no guarantee that everyone will watch you play live simultaneously. But a monthly estimate through ad revenue, bits, and maybe donations could probably help you land from several hundred to a few thousand dollars.

Furthermore having 1000 subs means there is a good chance your channel will continue to grow and expand through Google, social media, Twitch, and word of mouth. Having 1000 subscribers doesn’t necessarily mean you can quit your day job immediately. But it is a huge stepping stone through a mile’s journey to grow into a significant channel. It could be a chance to upgrade your kit, look at new games, create a website, and start promoting yourself.

1000 subscribers can be a great way to make a side income and grow into a significant channel! Once you reach that point, the game is really on and you are on the verge of actually making a living!

Can Twitch bits be turned into real money?

Now let’s talk about another income stream at the forefront of Twitch that is called bits. These bits act as fiat currencies for viewers who can support a streamer’s work.

Since bits are constantly changing in value, there is no clear number to place on their worth. But the most recent estimates say that a bit is worth around $0.014.

Bits do have an actual face value and can be turned into a real-time currency as payment. But how much are bits really worth? And how much money can you actually make by earning yourself 1000 bits?

Thus, these bits can in turn be exchanged into real dollars. 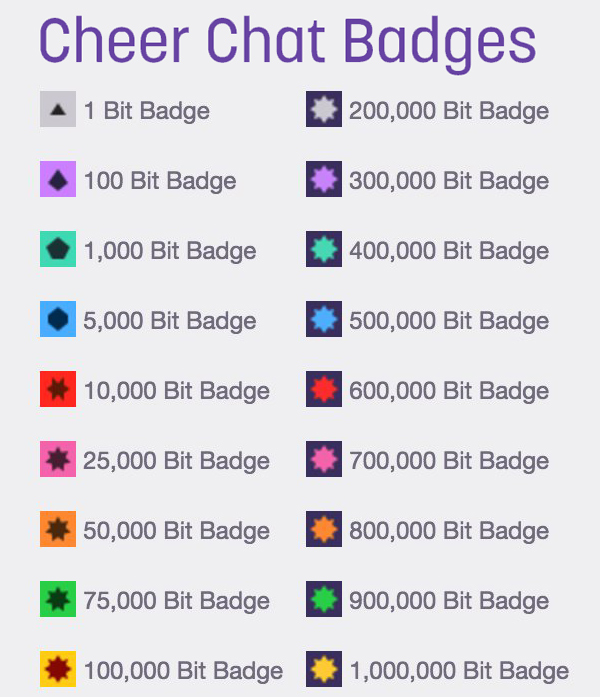 Starting out from scrap as a gamer on Twitch is not going to be easy. With so much content and so many streamers, viewers have a huge list of people to pick from. Standing out and entertaining your audience is perhaps the first thing every streamer should focus on before monetizing their platform to secure a few loyal followers.

Once a streamer has reached at least 100 subscribers, the entire scene changes and you can finally earn some money through affiliates, donations, ads, and bits. Prioritizing your main source of income is crucial in order to secure a higher revenue stream.

Looking To Be A Better Leader?

Is Your Team The Best It Possibly Could Be?

How to Start Affiliate Marketing with no Money?

How can you Make Money on TikTok?

How to sell photos on Shutterstock?